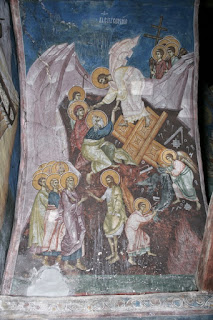 To all faithful children of the Church of St. Sava,

We greet you on the Feast of Feasts, the Holy Resurrection of Christ:

and glorify Christ, Risen from the dead...”

In accordance with ancient Christian tradition, the paschal service begins with the distribution of light. While in the church, when all the lights - candles and lamps - have been extinguished, the bishop comes out of the altar with the dikirion and trikirion lit from the lamp on the Holy Table, singing the following stichiron: “ Come ye, take light from the unwaning Light and glorify Christ, Risen from the dead.” He then distributes this flame as a blessing to the faithful who approach to light their candles. Then, while singing, “Thy resurrection, O Christ Savior,” they go outside and process three times around the church.  Afterwards, they reinter trumphantly into the fully lighted temple which symbolizes the Tomb out of which the Resurrection of Christ shone onto the world.

Saint Gregory of Nyssa, in his homily, “On the Resurrection of Jesus Christ,” points out that Saint John the Theologian, who that night with the apostle Peter raced to the Lord’s tomb, believed that Christ had risen because the tomb was filled with a miraculous divine Light which they not only saw physically but felt spiritually. Though it was still night, they clearly saw the grave-clothes where they lay.

Saint John Damascene also speaks about how the Apostle Peter was astonished when he beheld the light of the Risen Christ in the tomb. The hymns of the church describe this phenomenon as well:  “Peter coming quickly to the grave and seeing the light in the tomb, was afraid… (Octoechos, sessional hymn of Sunday Matins, tone 8).” At another point, St. John Damascene explains that the light which shone from the Lord’s tomb was the very same Uncreated Light of the Divine Creator which shone on Mount Tabor at Christ’s Transfiguration.

Saint Epiphanios of Cyprus teaches that through the resurrection from the dead of Jesus the God-man, “Salvation shone forth” like the sun: “God the Sun, Christ, went down under the earth, leaving the Jews in eternal darkness. Now salvation has shone forth for those living on the earth, as well as for those who had long since been in deepest hades.  Now shines the salvation of the world, visible and invisible. God comes down from heaven to the earth, and from the earth goes down into Hell, opening the gates of Hell; and those reposed from ancient times, who sit in the darkness and the shadow of death, rejoice in receiving the Great Light!”

What is the meaning of this excerpt from the Gospel of Matthew quoted by St. Epiphanios, which is in fact a verse from the prophecy of Isaiah: “the people that sat in darkness have seen a great light, and on those that sat in the valley and shadow of death, a light has shone upon them (Mat. 4:16, Is 9:2)” ?

Those who sat in darkness and saw a great light were the Gentiles, led to salvation by the Light of Christ. Those who sat in the valley of death were all those who, until the Resurrection of Christ, languished in the darkest dungeons of hades, waiting for His coming, and whom the Lord Christ, after His passion and death on the cross, having gone down into the regions of the underworld, enlightened and freed with the light of His resurrection, as was foretold in the prophecies of the Old Testament, “I will come to the depths of the earth” (Sir. 24:5).

During the forty days of Great Lent, at the Liturgy of the Presanctified Gifts, we heard a special verse: “ The light of Christ enlighteneth all”. These short words contain the whole truth of human life. They contain the truth about this world in which we live, in which we are born and die. They contain the truth about humanity, the human race, and all to which the human race is called. The human race, and every human being, and all creation is called to be enlightened by the light of Christ which enlightens and sanctifies “each and every one” because it is “the light of truth which enlightens every man” (Jn. 1:9).”

We sing about the Ressurectional illumination in the Paschal Odes: “It is the day of resurrection, let us be illumined…; let us purify our senses so that we may behold Christ who shines with the unapproachable light of the resurrection…; Now all is full of light, heaven, earth, and the depths…; Those who were bound by the chains of hell, seeing Thy boundless mercy, with joyful steps go toward the light, Christ, glorifying the eternal Pascha…; this truly holy and saving night, as the most solemn feast, illuminated  with light, hints at the light-bearing day of the Resurrection, for on this day the eternal Light embodied shines on all from the tomb…” [citations from various Paschal stichera].

The verse, “This is the day which the Lord hath made, let us rejoice and be glad in it”. (Ps. 117: 24) is often repeated throughout the paschal services.  Here the Church, through the prophet David, calls us to celebrate joyfully the unwaning day of the Resurrection of Christ. The day the prophet referres to is in fact the eternal light of the Resurrection of Christ. The apostle Paul also speaks about this unwaning Day:  “The night is far spent, the day is at hand (Rom. 13:12).”  That is, the coming of the light of Christ drives out the satanic darkness, leaving no place for even a shadow of evil.  For this heavenly day, the Light of Christ's luminescence, shines so brightly that the darkness of sin cannot swallow it up. Accordingly we read in the Gospel of John, “and the Light shone in the darkness and the darkness did not overcome it” (Jn. 1:5). We find this Light in the Apocalypse personified as a “woman robed in the sun (Rev. 12:1),” who the Holy Fathers say represents the Church, robed in the Word of the Father, shining brighter than the sun. This sunshine in which she is dressed, according to the Holy Fathers, means that she possesses true knowledge of God and His law, and contains His revelation.

Our joy in the Lord's day, where we abide in the uncreated light of the Resurrection, is our eschatological perspective. It is the guarantee, beginning, and foretaste of the future blessedness, in which the saved will rejoice in the heavenly Jerusalem, having no need of the sun or the moon or any other light, because there shines the Sun of Truth - Christ our God: “for the Glory of God did lighten it, and the Lamb is the light thereof (Rev. 21:23).”

This is why the light of the Resurrection is the light of Christ’s victory, eternal victory over the darkness of sin and death, final victory over the devil himself and his armies (Rev. 20:7-10).  Let this victorious Light of Christ enlighten and  strengthen us to carry our cross!  Let it always be the lamp, compass, and signpost for the tortured human heart in the modern world which “loved darkness rather than light (Jn.3:19),”  in which the line between good and evil, between lies and the truth are quickly being destroyed and erased. In the world which is deeply bogged down in the darkness of godlessness, we need this Divine Light more than anything!

On this day we cannot forget the much suffering triune Russian people* who have already suffered for over a hundred years under a heavy godless yoke. At this time when in Kievan Rus(sia), to the joy of Christ’s enemies, a bloody fratricidal war rages, we offer heartfelt prayers for the deliverance of the triune Russian people from the demonic powers of the pentagram, in whatever color it has been painted, red (SSR), yellow(EU), or white (USA).  We also pray for the restoration to the throne of a right-believing, Christ-loving, Russian tsar katehon, (Greek -  ὁ κατέχων, the one who holds off the coming of Antichrist, II Thess. 2:7), God’s anointed, and that under his authority and protection they and we might live a quiet and peaceful life, in all piety and purity.

Through this world which “lieth in wickedness” (1Jn. 5:19) and which “breathes out threatening and slaughter” (Acts 9:1) against Christians, as true Orthodox Christians without “fear of the Jews” (Jn. 20:19) we are called, “as children of the Light… having no fellowship with the unfruitful works of darkness” (Eph. 5:8,11), to carry the Light of Christ - for it is said, “ye are the Light of the world”(Mat. 5:14), and to fearlessly proclaim it to lost humanity, which, according to the words of holy Vladika Nikolaj Velimirovich, is covered by the horrible darkness of apostasy.

Today let us light the Paschal candle of our hearts with the fire of the unwaning Light, and bringing our flames together, be united in the mighty torch of Christ so that the Great Light may shine out and drive the darkness into the nether realm.

Let God arise and let His enemies be scattered

Let them that hate Him flee from before His face

Your intercessors to the Risen Lord

*The triune Russian people is composed of the eastern Slavic tribes of the Great Rus, Little Rus (“Kraishnici” - “people who live at the borders”), and White Rus, which made the ancient Rus the largest nation and state of Europe. This nation stretched from Ladoga, Novgorod, Vladimir, and Pskov to Polotsk, Kiev, and Chernigov. They were united by one language, the Rurik dynasty (later the Romanovs), and one faith, Orthodoxy.