Patronal Feastday of "The Paraclete" 2021 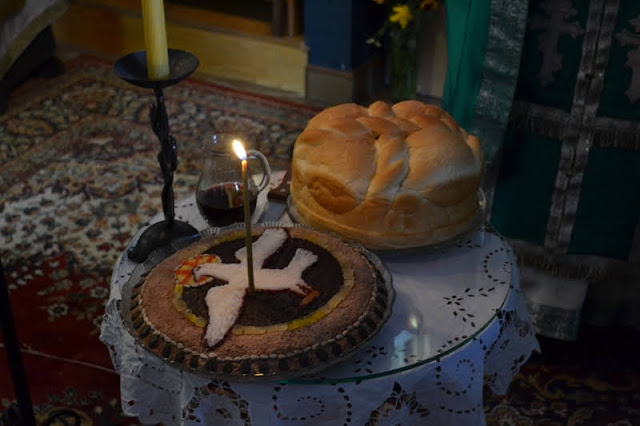 The feastday of Pentecost, the descent of the Holy Spirit, the Comforter, on the Apostles, the patronal feastday of  Uteshiteljevo (“The Paraclete”) Monastery and the Serbian TOC eparchy, was celebrated again this year with a holy hierarchical liturgy led by Bishop Akakije of Uteshiteljevo co-celebrating with Bishop Nektarije of Shumadia and other members of the Uteshiteljevo eparchy clergy.

In the sermon during the Liturgy Bishop Akakije emphasized the importance of the feastday of the descent of the Holy Spirit on the Apostles as the event, along with the Holy Ascension of Christ, which completed the divine economy of the salvation of mankind: they are the crown and seal of all feastdays. With the Ascension of Christ, the God-man, human nature was taken up into heaven and thus the Heavenly Kingdom was opened to the entire human race. In order for man to attain the Heavenly Kingdom, the Holy Spirit, by descending on the Apostles, gave them the fullness of grace-filled gifts through which we are cleansed, saved and become communicants of divinity.  The Holy Spirit appeared in the form of tongues of fire; the characteristics of fire are warmth, light, and the power of combustion. It is these very characteristics that are the grace-filled gifts of the Holy Spirit which warms our cold hearts, enlightens our darkness, and burns up the thorns of our sins.  The Holy Spirit appeared in the form of tongues of fire upon the Apostles from which they received the gift of polyglotism.  Bishop Akakije linked the polyglotism of ordinary Galilean fishermen with a divine confirmation that in the very beginning of the Church, because the Descent of the Holy Spirit on the Apostles is considered the birthday of the church, God showed to whom the gospel message was directed - no longer to the Jews, who had rejected and crucified Christ, but to the newly-chosen, new Israel -  the Church of Christ. The Lord’s words to His disciples when He rose from the dead confirm this:  “Go and preach to all the nations.”  His Grace also mentioned that the teaching about the Holy Spirit is the most important dogma of the Trinitarian teaching of the Orthodox Church which was precisely defined and added to the Nicene Creed during the Second Ecumenical Council held in Constantinople.  This is why we call our Orthodox Faith the Nicene-Constantinopolitan confession of the faith. The Nicene-Constantinopolitan dogmatic teaching was sealed and declared final by all subsequent Ecumenical Councils, without the possibility of the slightest change. Abiding in the Church and taking advantage of the grace-filled, salvific gifts of the Holy Spirit is only possible if one believes in the Orthodox faith, which is why it is essential that the Orthodox Truth be preserved undefiled and intact as the foundation of our salvation.  After the Apostles, in the words of the Gospel, were clothed “in power from above,” they changed from cowards who hid out of fear of the Jews to fearless preachers of the salvation of the resurrected and ascended Christ, no longer afraid of any kind of persecution or death. His Grace Bp Akakije ended his sermon with a prayer that this “power from above,” the power of holy courage, would descend upon all those present so that we would not fear the terrible persecutions of the antichrist, but rather to the end remain faithful children of the Church of Christ, against which, according to the Lord’s promise, the gates of hell shall not prevail.

After the end of the Liturgy and the blessing of the traditional “Slava” (patronal feastday) bread and koliva, the latter of which was decorated by the nuns with an image of the Holy Spirit in the form of a dove, was a festive meal of love during which His Grace Bishop Akakije, Novi Stjenik Abbess Mother Efrosinija, and Uteshiteljevo priest Fr. Jovan Ristic addressed those present with appropriately inspired toasts.

After the end of the meal, the Kneeling Vespers was served during which the faithful present wove traditional Pentecost wreaths out of grass as visible symbols of the blessings of the Holy Spirit for their homes. With this final service, the celebration came to an end.