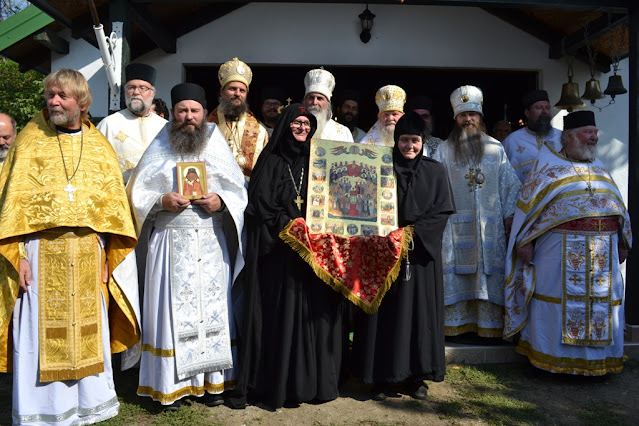 On Sunday, 28th Sept/11 Oct 2020 AD, the hierarchs of the Serbian True Orthodox Church and the Russian Church Abroad served the divine liturgy together at Uteshiteljevo Monastery outside of Belgrade, the sealing of a dialogue for the establishment of Eucharistic communion between the two sister churches.

This majestic co-celebration was the beginning of the celebration of the 100th anniversary of the founding of ROCOR.

Four hierarchs presided over the divine services: the bishops of the STOC His Grace Akakije of Uteshiteljevo and His Grace Nektarije of Shumadia, and the bishops of ROCOR, Archbishop Andronik of New York and North America and Archbishop Sofrony of Saint Petersburg and Northern Russia, with the co-celebration of eight priests from Serbia and the USA. 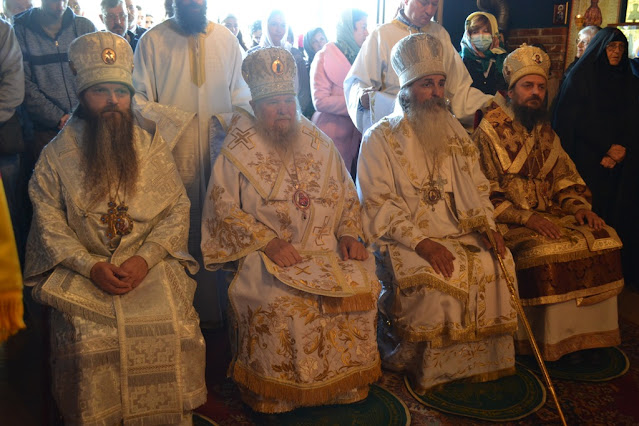 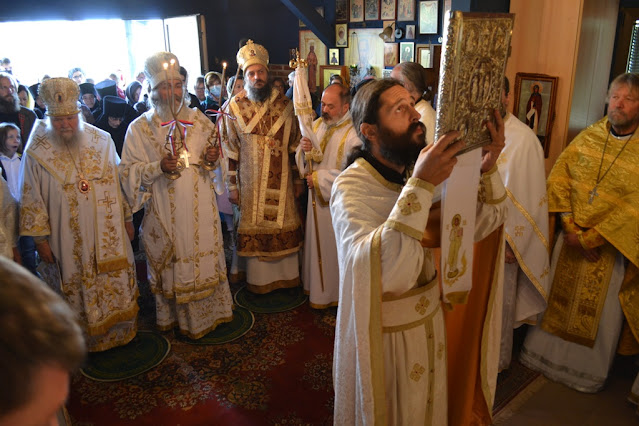 Along with the celebration of a jubilee of ecumenical importance in the holy battle for the defense of Holy Orthodoxy from the great contemporary apostasy, on this day the Church celebrates the memory of St. John of Shanghai and San Francisco the wonder-worker, a great saint of the Russian Church Abroad. The celebration of Venerable Mother St. Euphrosyne of Alexandria, the namesday of Reverend Mother Abbess Efrosinija of Novi Stjenik, was also moved to this day.

The divine services were enriched by the presence of the icon of ROCOR, newly-painted to mark the church’s 100th anniversary along with holy relics of St. John of Shanghai and St Euphrosyne of Alexandria.

Despite the emergency situation caused by the corona virus global conspiracy which has caused the closing of many state borders, nonetheless, a fairly large number of pilgrims from all of Serbia, Bosnia, the USA, and France participated in this great and historical spiritual feast. Nuns from Lesna Convent (France) and Novo Brdo Convent (Bulgaria) also adorned the feast with their prayerful presence

The co-celebration of the Serbian and Russian clerics was a source of delight for all. The festive liturgy left an impression on all the faithful of an especially grace-filled and meaningful event. All those present were overwhelmed with the feeling that they were taking part in a most lofty and joyful Paschal service. 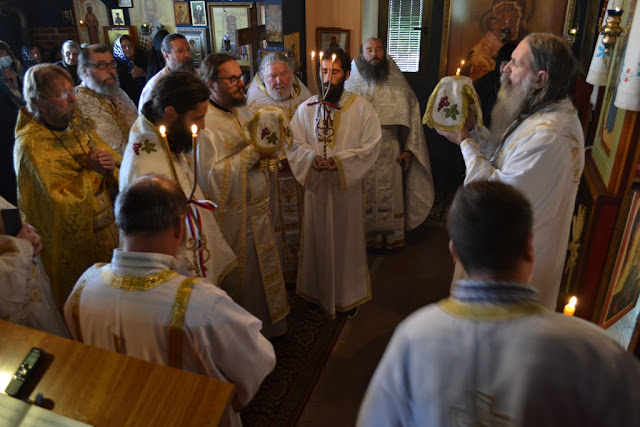 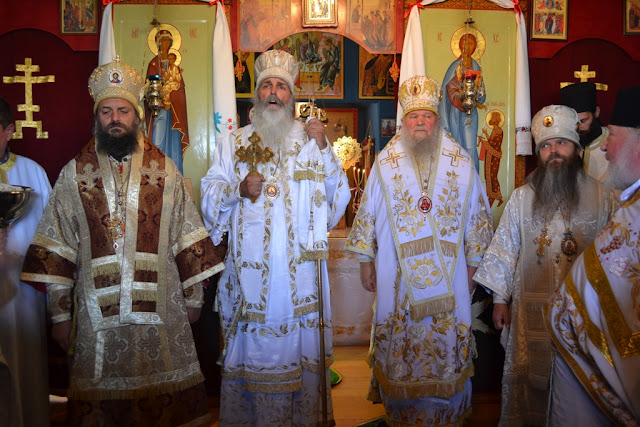 In his sermon, Bishop Akakije greeted the honored guests and emphasized the significance of the character and labor of St. John of Shanghai the wonder-worker, uncovering of whose relics the church celebrates on this day. Then he explained the spiritual meaning of the gospel that Sunday about the plentiful harvest of fish, connecting this with the current event of the establishment of communion between the two sister churches. Zeal for the fulfillment of the gospel commandments, especially about mutual love, by which all will recognize the disciples of Christ (Jn. 13:35) is similar to the zeal of Simon Peter who obeyed his Teacher unconditionally by throwing his net into the sea, even if he had spent the entire previous night without catching anything. Thanks to this zeal he was deemed worthy not only of a rich harvest of fish, but of the vocation to become an apostle, a “fisher of men.”  His Grace Bishop Akakije ended his sermon with the hope that this ecclesiastical communion will bring a rich harvest in the vineyard of the Lord, to the glory of God and for the salvation of many souls who are lost in the sea of life and the life-threatening storm of the great modern apostasy.

After the prayer in front of the ambon, His Grace Bp. Akakije blessed the koliva and broke the namesday bread with Abbess Efrosinija, which was a special experience for our brother Russians as this is a rite particular to the Serbian liturgical tradition alone. 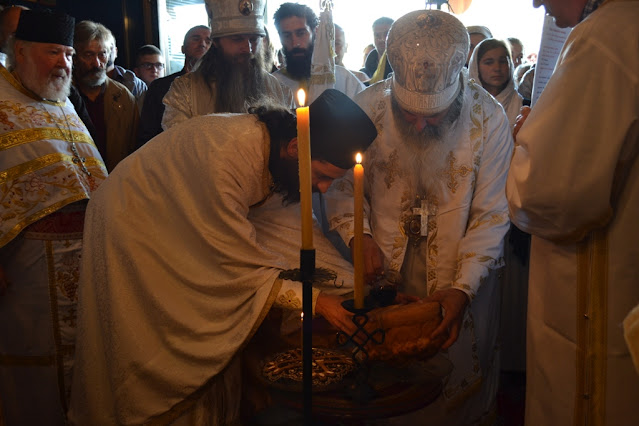 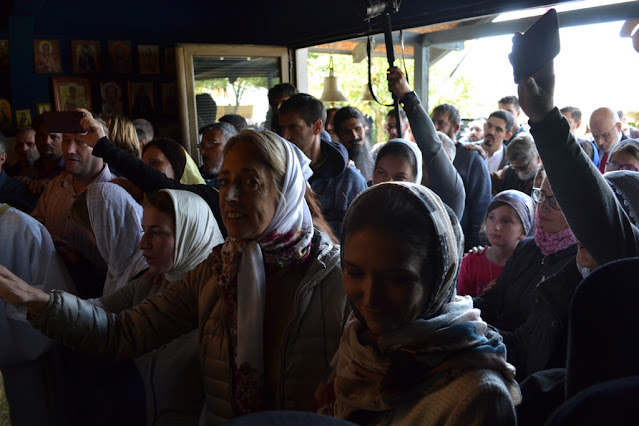 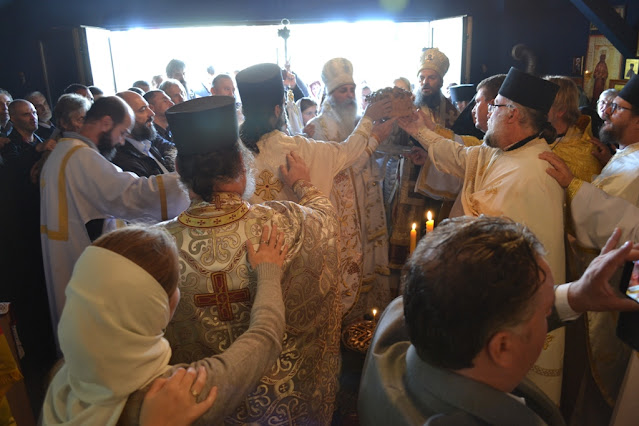 As they exited the church to the ringing of bells, the hierarchs were met with flowers by boys and girls in traditional Serbian folk costume, and on their way to the meal of love children threw rose petals over their path. 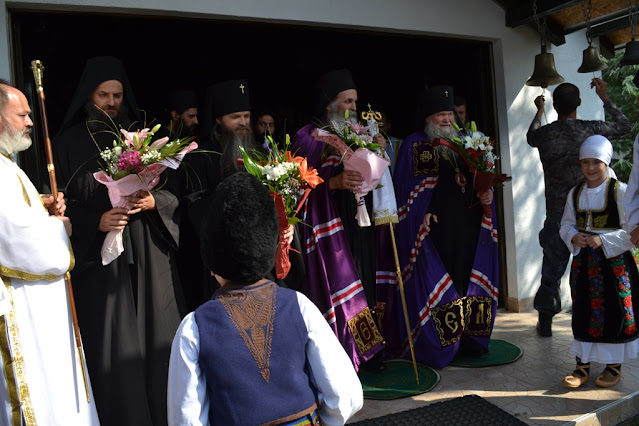 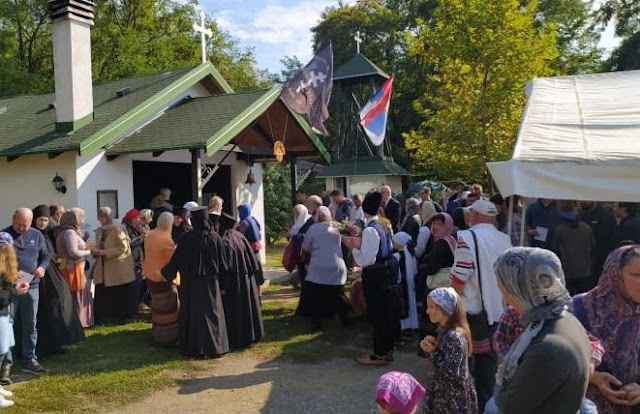 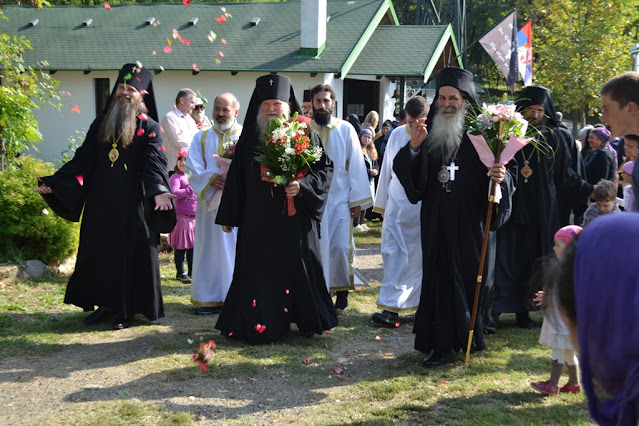 For this special occasion a tent had been set up and decorated with big flags of the Kingdom of Serbia and the Russian Empire which were tied together at the top. In the center hung an icon of Our Lord Pantocrator, symbolizing the unbreakable union of Serbs and Russians in Christ God, like a pledge of liberation from the great evil which has devastated our Christ-named people. 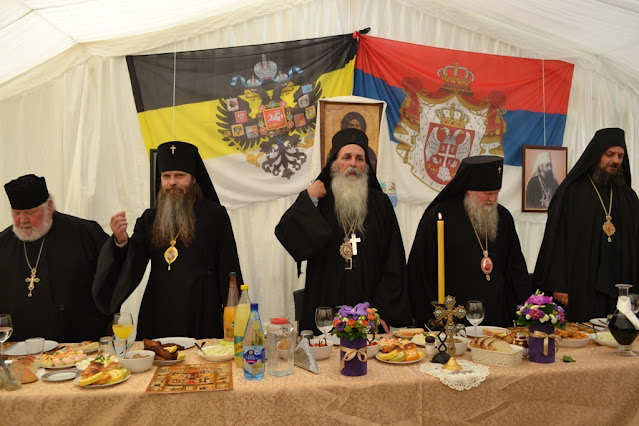 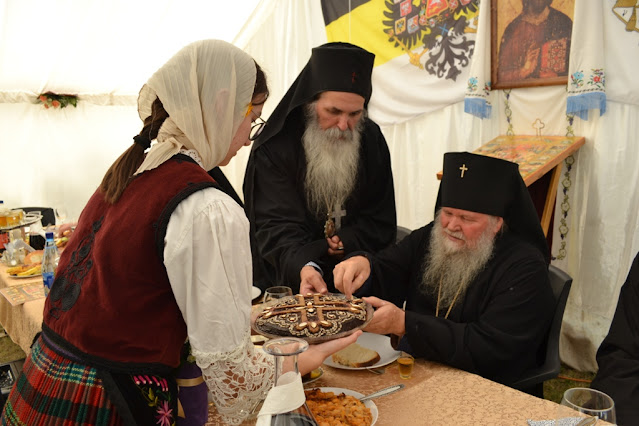 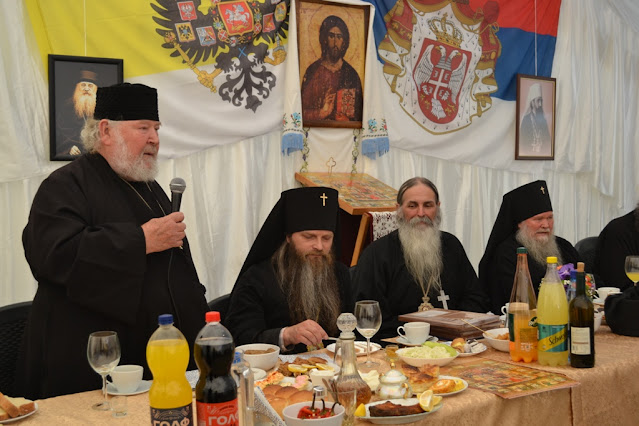 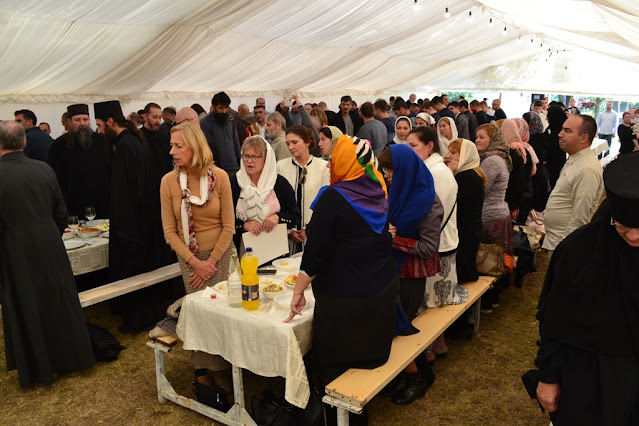 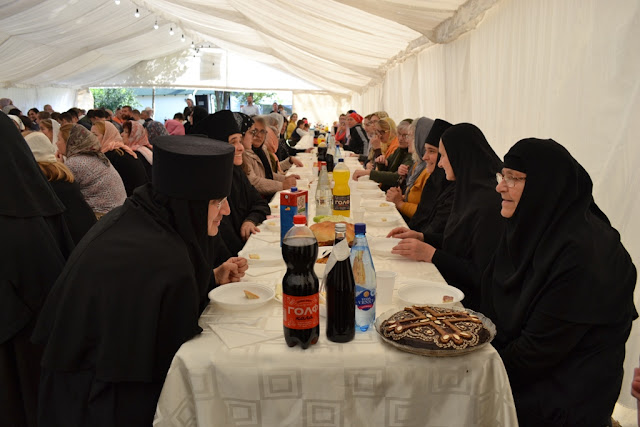 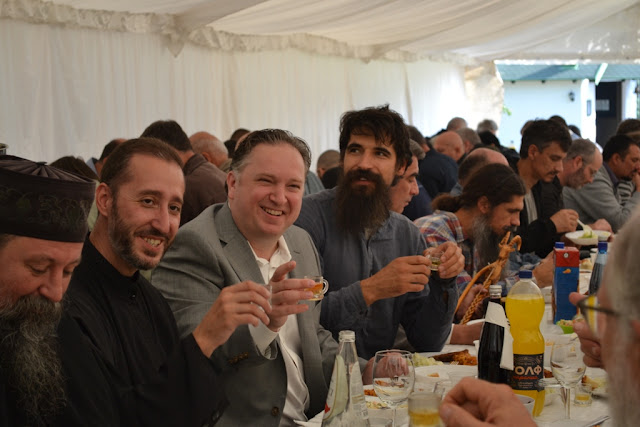 The meal of love was full of many inspired toasts and speeches of the hosts and guests which at times filled those present with joy or at other moments moved them to tears.

Towards the end was a performance by the gusle virtuoso Vukman, whose inspired interpretation of Serbian epic songs gave this event the tone of a special, old-fashioned church-folk celebration which without a gusle player could not even be imagined. 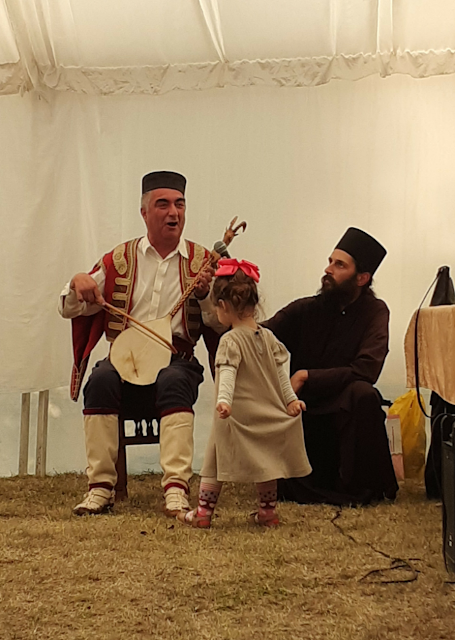 After the thanksgiving prayer, socializing with the singing of Serbian and Russian national, spiritual and folk songs followed.

With another ringing of all the bells, the hierarchs of ROCOR were festively sent off from Uteshiteljevo Monastery in order to spend the next few days visiting historical places of importance in the foundation and growth of the Russian Church Abroad.

Praise and glory to Our God unto the ages of ages! Amen!