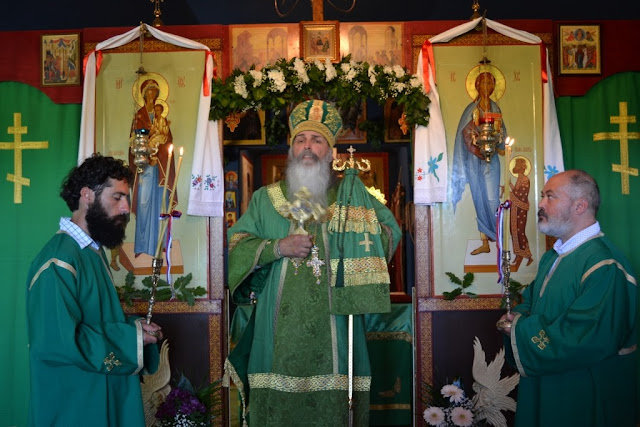 June 7 (NS) 2020
This year our monastery and episcopal seat “Uteshiteljevo” (The Paraclete) enjoyed another
joyous celebration of our patronal feastday, Pentecost. His Grace Bishop Akakije of
Uteshiteljevo presided over the holy services accompanied by His Grace Bishop Nektarije of
Shumadia and the rest of our clergy. The Holy Hierarchical Liturgy began with the solemn
singing of “O Heavenly King” (the hymn to the Holy Spirit) which is sung on this day for the
first time since Pascha. The holy services flowed beautifully and prayerfully. Venerable Mother
Abbess Efrosinija led the monastery choir, which gave the entire celebration an especially lofty
spirit. As the church was full to overflowing, the mass of the believers spilled outside into the
churchyard.
After the very moving feastday gospel reading (John 7:37-52), which describes how the Lord
promises that He will send the Holy Spirit to everyone who believes in Him, Bishop Akakije in
his sermon explained that this is the highest goal of Christian life: that through the fulfillment of
the Gospel commandments, we become bearers of the Holy Spirit.  The parable of the wise
virgins illustrates, as St. Seraphim of Sarov explained, that it is not enough to only have good
works, as the foolish virgins did, but like the wise virgins, we must with great labor and care
acquire oil, that is, the Holy Spirit, for our lamps of the soul.
Truly a great grace shone on our Uteshiteljevo feastday, and to God’s glory, many people
received the Most Holy Mysteries.
The Holy Liturgy was followed by the meal of love, during which the clergy offered words of
encouragement and comfort to the faithful to not waver in their zeal to serve Christ both in
confession and in life in these trying times. It was also a joy to see a full table of about twenty
children, hope for the future of our much-suffering fatherland. After the thanksgiving prayer, the
visiting continued for the entire afternoon, during which the children, all friends from Novi
Stjenik’s St. Lazar Camp, danced the kolo (Serbian folk dance) together merrily.
The day closed with the special Vespers service, during which the clergy pray for the descent of
the Holy Spirit, as everyone kneels and weaves wreaths of grass according to ancient tradition
dating from the Old Testament, when the Jews would decorate the temple with greenery for this
very feastday.
Even after Vespers, many of the faithful still could not bring themselves to leave Uteshiteljevo’s
grace-filled atmosphere, and returned to the feastday tent, from which pious and patriotic songs
were heard well into the evening hours.


O Most Holy Trinity, Our God, Glory to Thee!