TRUE ORTHODOXY THROUGHOUT THE WORLD FOR THE AID OF FLOODED SERBIA 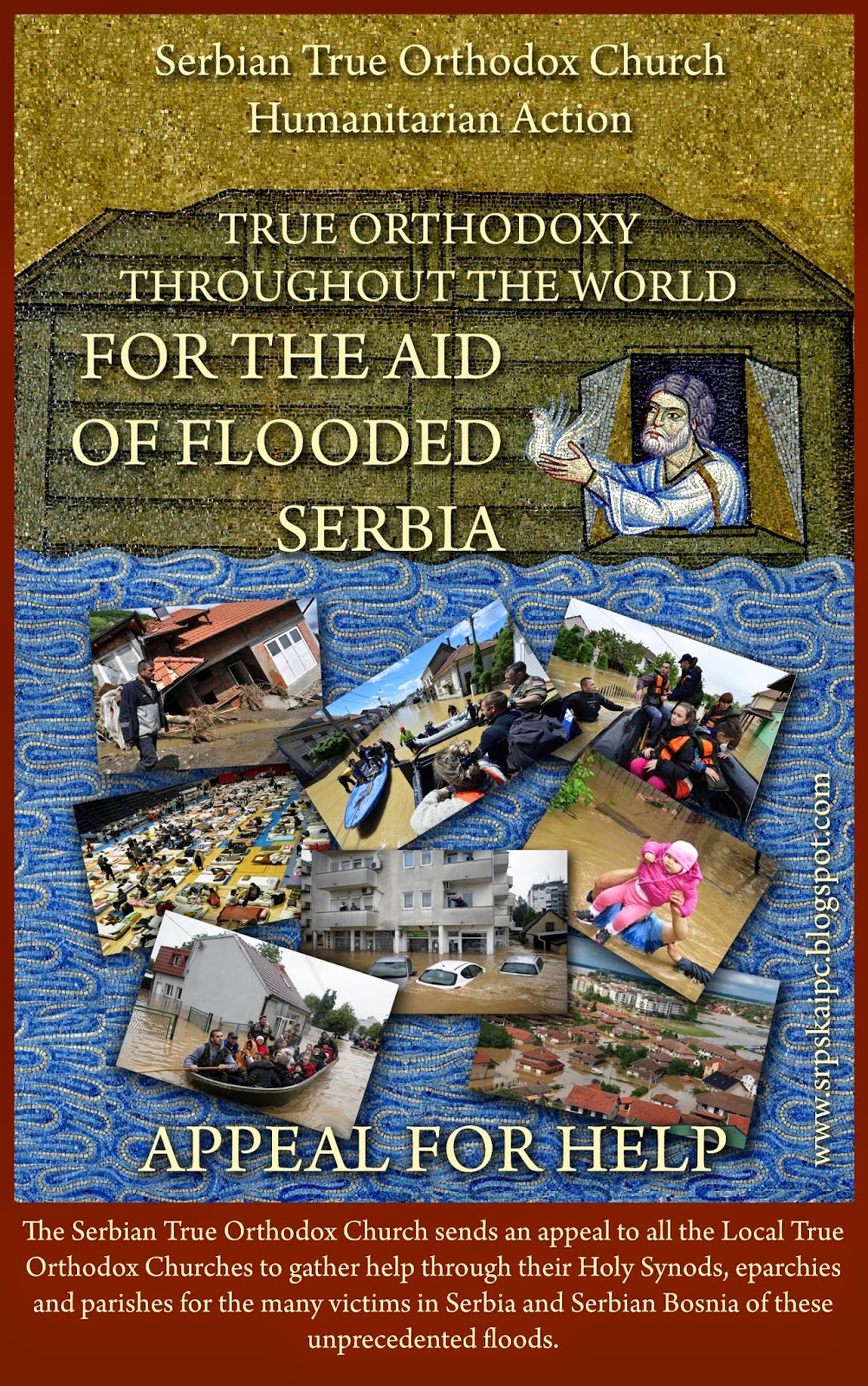 His Grace Akakije Bishop of Uteshiteljevo has sent an appeal to all True Orthodox Churches throughout the world to take part in the humanitarian action which the Serbian TOC has begun to help the victims of the cataclysmic floods in Serbia.  On the official site of the Serbian TOC an appeal from His Grace Akakije in has been published in the Serbian, English, Russian, Romanian and Greek languages.
Along with being significant help which would be collected for the victims of the floods this would also be the first joint action of all the True Orthodox Local Churches throughout the world.


In the following we present the content of the appeal broadcasted:

TRUE ORTHODOXY THROUGHOUT THE WORLD
FOR THE AID OF FLOODED SERBIA

To the Most Reverend Leaders of The True Orthodox Churches,
Archbishops, Metropolitans, and Bishops


As you most likely know, the greatest misfortune within the last hundred years has come upon our people.  Parts of Serbia and Serbian Bosnia have been struck by an unheard-of catastrophe.  Many cities and villages are flooded, tens of thousands of people have temporarily, or permanently, been left homeless.  The evacuees have been relocated to a center for temporary housing.  They left their homes bringing nothing except the clothes on their backs.  The rising waters, torrents, and landslides have destroyed their homes, properties, fields and livestock.  Though the Serbian state and the Serbian people are doing all that is within their power to keep the cataclysmic situation under control, any and all help, even the smallest, is more than welcome.  Many official Orthodox and heterodox churches have shown their great solidarity and readiness to start projects of gathering help for the flood victims.
Your Beatitude, Your Eminences, and Your Graces, we would be most grateful if the True Orthodox throughout the entire world would answer to our appeal and involve themselves in the movement to help the victims of these catastrophic floods by making a transfer of funds to a bank account which will be used for direct help organized by the Serbian True Orthodox Church for those in the most danger at their location.  With the financial means collected through our appeal, the purchase of basic, long-lasting, or canned groceries, bottled drinking water, essential medicines, diapers, and basics for hygiene and disinfection, etc, will be organized which a group of our believers, volunteers, led by the clergy, will give out in the most devastated cities in Serbia and Serbian Bosnia which have been hit by these terrible floods.
We also beg You for the most heartfelt prayers of Your Churches that the Lord have mercy on our much-suffering people, and that the Gentle and Man-loving God be merciful and compassionate,  turn away all wrath which has be directed at us, deliver us from His imminent and righteous threat, and have mercy on us.
Your brotherly help for Serbia will not only be like that olive branch of Noah’s dove which will ease the suffering and offer hope to our suffering people in this difficult time, but at the same time, like a life-preserver, bring them to knowledge that the mystical Noah’s Ark, the True Orthodox Church, which can save them from the flood of the great apostasy, is within their reach.