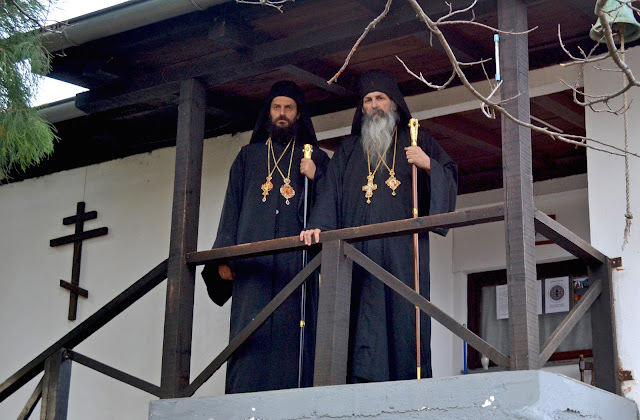 Due to some erroneous interpretations of the document from the Serbian Hierarchs to the Holy Synod of the Greek GOC in October of last year (1/16 October 2015) http://serbiantrueorthodox.blogspot.rs/2015/11/petition-for-establishment-of-canonical.html , we consider it needful to clarify the Petition itself along with our position in regards to this entire matter. Namely, among certain circles both here in Serbia and abroad some assert that we Serbian hierarchs came to the Greek GOC in repentance for causing a schism and supposedly asked that the Greek GOC receive us back into their jurisdiction.  The very title of our petition, however, should answer the two questions which are posed in the title of this text. From the title of the petition it is clear that one Local Church is initiating entry into communion with another Local Church. Furthermore, in the text of the Petition itself the word schism is never used.


The contents of the Petition exclusively concern the cessation of communion between two Local Churches along with a list of the reasons why this break took place.  In the spirit of humility,  the Petition attributes the fault for the break in communion entirely to the Serbian Hierarchs without any kind of accusations directed at the other side. This self-blame is despite the fact that the other side’s unbending position, that the Serbian Orthodox people and the Serbian Church should be under the Greek Church, is in large part the cause of the situation.

The Petition seeks to establish communion between two independent Local Churches with the same confession of faith and canonical episcopacy, based on the Lord’s commandment that unity in love between His disciples is one of the main confirmations of true loyalty to Him and His Divine Will. In this spirit, we Serbian Hierarchs, zealous to fulfill the commandment for the unity of the Church, humbly address our brother Greeks with a petition to “do everything we can together in order to establish canonical unity between our two sister churches to the glory of God.” As the foundation for beginning to establish canonical unity between our two Churches we offer our sincere repentance for the actions which we took of our own will in the vital interests of the Serbian Church and the Serbian Orthodox people. These actions were taken after several years of seeking a solution, during which we tried every means possible to come to an agreement with the Greek hierarchs.  Thus, we repent exclusively for the self-willed nature of our actions, in entering into communion with the Russian True Orthodox Church  (without the brotherly agreement of the Greek Church) and receiving help from them in renewing a canonical episcopate.  It should be recalled that the Greek TOC recognized the Russian TOC as the canonical Russian Church which completely preserves a True Orthodox confession of faith. Along with this repentance, in the Petition forgiveness is sought “for any rough and hurtful words which we may have said or published” during the polemics about a solution for the canonically unresolved (destroyed) status of the Serbian Church.  The Petition does not contain a request that the Greek GOC hierarchs receive us under their omophorion after we seek repentance for schism.  This idea cannot be found in any part of the Petition.

Let us mention something else. When my unworthiness went to a preliminary discussion in Athens in the Greek GOC Synod office (Oct. 12,2015) about our initiative to establish canonical communion between the Serbian and Greek TOC, His Beatitude Archbishop Kallinikos and several metropolitans and bishops were present.  From the very beginning of the conversation one metropolitan wisely and concretely asked me what position I was addressing them from: was it as an ex-member of their clergy who sought to be received back into the jurisdiction of their Church, or as the representative of another autocephalous Church which sought communion with their Church?  My answer was unmistakably clear: that I was coming as the representative of the autocephalous Serbian TOC which is seeking to establish canonical communion with the Greek TOC.

My answer was accompanied by an explanation, especially brought forward because of the presence of new bishops (from the former Synod in Resistance) who most likely were not familiar with our old problems.  I mentioned that, in the beginning of 1995 as believers (monks) of the Serbian Church we had already joined the Greek TOC in the monastery of Esfigmenou on the Holy Mountain, as a result of the apostasy of the Belgrade Patriarchate into the heresy of ecumenism and the apostasy of Sergianisim.  From the very beginning we sought help from the Greek Church to accept the temporary administration of the widowed Serbian Church. This implied brotherly help in the rebirth of Orthodoxy in Serbia for which the establishment of a canonical episcopate was an imperative.  According to canonical guidelines, the administration of one widowed eparchy (or in this case, Church) must be of an absolutely temporary nature.  The canons strictly forbid lengthening the period of the temporary administration in order to prevent abuse.  The duration of this temporary administration is strictly defined in order to prevent the help turning into the abuse of episcopal authority by taking over the church entrusted to it.

However, after fifteen years of the Greek Church’s administration of the widowed Serbian Church, except for the help which they did give, which was indeed meaningful and for which we are truly grateful, not only did the Greek Church not fulfill the basic task of administration but they even, against the canons, gave themselves the right to take the Serbian Church and its entire territory under their own jurisdiction.  To the disadvantage of the freedom and the vital interests of the Serbian Church, they insisted on the inviolability of their authority.  When the Serbian clergy, monastics and believers opposed this uncanonical state, the assumption of all the rights of government and administration of the widowed Serbian Church for the indefinite future, this opposition was declared to be the sin of disobedience and rebellion against lawful bishops. Meanwhile, because of petty personal interests, they accepted and defended as obedient and loyal those who praised them.  In this manner, over the years, a very serious rift among the clergy and flock of the Serbian Church arose which over time became almost insurmountable.  This uncompromising stance as well as the inadequate attention given to the flock and clergy by the administration at that time brought the Serbian Church to a state of complete disorder and made any progress impossible.

What is the matter at hand here?  Does the Archiepiscopate of Athens have the canonical power to relate in such a way towards a Local Church in such misfortune?  The Serbian Church is a Patriarchate.  Thus, in rank and historical dignity, it is higher than the Athens Archiepiscopate, and it is known that the Serbian Church has never in its entire history been under the Athens Archiepiscopate.  It follows that  the Greek TOC has no right to impose itself as a lawful and canonical church authority in Serbia.  The Greeks claim that because the Serbian people has fallen into heresy with its bishops and that the Serbian Church has disappeared, the canonical territory of the Serbian Church now belongs to the Greek Church.  Even so, the logic of taking territory according to the rule “first come, first serve” is not applicable because the Greek TOC did not enter and missionize Serbia on its own initiative. Rather, they responded to the call from the faithful from the Serbian Church for help in its renewal, and that within the strictly defined structure of a temporary administration.  It follows that if the condition of temporary administration for the sake of help is not fulfilled, or what is more, prevented, then we who had called upon the Greek Church for help have the right to call upon another Local Church which has no less right than the Greeks to come to the territory of our canonical jurisdiction and help in its renewal. The Greeks’ claim that the Serbian Church does not exist and that the Serbian people have ceased to be Orthodox, ie that we have regressed to the level of an unenlightened people for whom evangelization is again necessary, is simply unacceptable to us.  We maintain the position that despite the fall of the Belgrade Patriarchate into the heresy of ecumenism, the majority of the clergy, monastics and faithful have remained faithful to Orthodoxy and do not accept ecumenism as a doctrine.  On the contrary, in fact, there is a significant opposition to ecumenism as a modern heresy.  Nor do the majority of the Orthodox Serbs accept adopting the New Calendar, and out of fear of creating a large division the official hierarchy does not dare to introduce calendar reform.  Thus, the only sin of a large majority of the clergy, monastics and especially the ordinary believers is only the unwilling, and sometimes unconscious communion with heretics.  In order to encourage the cessation of communion with the heretical hierarchy it is necessary that a canonical Serbian True Orthodox episcopacy exist in Serbia whose first interest is the Serbian Church. Joining them would not be leaving the Serbian Church and joining the Greek, as many have understood, but rather leaving a heretical hierarchy and joining the True Orthodox, all the time remaining in one’s own Local Church and remaining under one’s own episcopacy. Unfortunately, the Greeks had no understanding of this problem for an entire fifteen years. Their insistence that Serbia be under the Greek Church and that entry into the True Church implies joining the Greek Church inflicted such wounds in the holy battle for the rebirth of the Serbian Church that it will take much time to recover from them.  The Greeks’ insistence on akrivia in receiving people from the official to the True Church, by re-baptizing all and sundry without any sort of discernment, and the immeasurable harm done by this stance we will not examine in any further detail here.

Today the Greek TOC, despite the existence of the Serbian TOC’s canonical episcopate, has a parish (Panchevo) and a monastery (Bosnia) in the canonical territory of the STOC with a corresponding number of clergy members, thus continuing to create division among the Serbian flock.  We bishops of the Serbian TOC were ready to make a compromise and accept this uncanonical situation. That is, upon the entering into communion of our two Local Churches, this parish and monastery would remain under the temporary jurisdiction of the Greek TOC.  This would be under the condition that the Greek TOC would no longer have the right to broaden its jurisdiction in the canonical territory of the Serbian Church by creating new parishes or monasteries, ordaining new clergymen or accepting clergymen from the official church.  Yet despite all of our efforts to reach canonical unity between our Churches, the reply from the Greek Church to our petition of December 1, 2015 was devastating to us.  The Greek TOC, after all the debates, polemics, initiatives and petitions from us again sought that we should submit to some kind of Greek Belgrade Metropolis and a Greek guardian of St. Sava’s patriarchal seat.  Of course, such a suggestion was not even taken up for official consideration.  All who read this suggestion were extremely insulted by the Greek Church’s unscrupulous stubbornness in trying to keep power over Serbia at any price.  Our last initiative thus only received an echo of similar responses, where we found ourselves again coming up against a wall of a complete lack of understanding or sympathy.

Nonetheless,  we are not giving up on seeking that the Lord’s commandment for unity in love between His disciples be fulfilled in deed. Thus we will make every effort for the unity between all the True Orthodox. We cannot, however, for that purpose give away the independence of the Church of our Serbian Fatherland, something which we have no right to give.

Sunday of the Myrrhbearers, May 2016
+Ak