Visit of His Grace Bishop Akakije to Russia 2015

In the second half of October, His Grace Bishop Akakije of Uteshiteljevo as the representative of the Serbian Church traveled to Russia for the purpose of visiting the Synod of the Russian True Orthodox Church.  His Grace was accompanied by Protopresbyter Aleksey Lebedev from St. Petersburg and Nuns Macrina and Alypia. The Session of the Russian Synod was held in the town of Dmitrov in the outskirts of Moscow, in the parochial house of St. Seraphim of Sarov Church. The purpose of the visit was to begin a discussion on the theme of the unity of the True Orthodox Churches.

Bishop Akakije conveyed the stances of the STOC to the Russian hierarchs, expressing the STOC’s support of the unity of the families of the True Orthodox Churches which the Greek True Orthodox Church began in March of 2014.  In this context Vladika Akakije in the name of the STOC expressed disagreement with the RTOC’s reception of Greek clerics under Her omophorion.  He likewise inquired into the possibility of the uniting of the separated parts of the Russian Church, that is the Russian True Orthodox Church (led by Archbishop Tikhon of Omsk and Siberia), the Russian Autonomous Church (led by Metropolitan Theodore of Suzdal and Vladimir), and the Russian Church Abroad (led by Metropolitan Agathangel of Odessa).  The Synod of the RTOC received the presentation of the Serbian TOC’s stances and will take them into consideration.
In the church of the hierarchal house of the Suzdal Synod. Protopresbyter Aleksey, Bishop Akakije, Metropolitan Theodore and Bishop Irinarch
In addition to the visit to the Synod of the RTOC, according to a confirmed plan, the official part of the visit also included a visit to the Russian Autonomous Church (Suzdal Synod).  In the city of Suzdal, in the hierarchal house of the Suzdal Eparchy, Bishop Akakije met with His Eminence Metropolitan Theodore and His Grace Bishop Irinarch.  A conversation lasting for several hours was conducted in a very warm and pleasant atmosphere.  After Vladika Akakije acquainted them with the history of the Serbian TOC, the bishops exchanged their opinions and stances about reaching the goal of the unity of the Russian Church.  After the conversation, Bishop Irinarch took the guests on a tour of the historical city of Suzdal and its holy places.
During the six-day stay in Russia, the group from Serbia visited Moscow and the Holy Trinity-Sergius Lavra, and at the wish of Bishop Akakije, visited the town of Podolsk, or rather, a little-known museum dedicated to the battle against the Bolsheviks.  As the nuns, as well as His Grace Bishop Akakije, are iconographers, along with several holy places they visited the famous Tretyakov Gallery, where they had the opportunity to be inspired by the beautiful ancient Russian iconography of exceptional, unsurpassed Russian iconographers among whom especially stand out Theophan the Greek, Andrei Rublev and Dionysius.  Our group stood before the Tretyakov holy treasures, the original Rublev icons of the New Testament Holy Trinity, the Mother of God of Vladimir and of the Don, as well as the other masterpieces of Russian Church art.  Along with the icon section of the museum, in which the group spent several hours, they also visited the parts of the gallery featuring the gems of Russian master painters.  For them the most remarkable paintings were those of Shishkin, Levitan, Polenov, Surikov, Nestorov, Vasnestov and Repin.
Due to a lack of time the group only managed to visit the Moscow holy sites of the Sts Martha and Mary Convent, where the arm of the Venerable Martyr Grand Duchess Elizabeth is kept, along with the Donskoy Monastery in which the relics of Hieromartyr Patriarch Tikhon are located. In the Donskoy Monastery they prayed at the graves of the anti-Bolshevik heroes of the Russian Civil War Denikin and Kappel, along with the famous Russian monarchist and thinker Ivan Ilyin.

At the Holy Trinity-Sergius Lavra they venerated the great spiritual treasure of the relics of Venerable Sergius of Radonezh the Wonderworker, along with many other relics, one of the most special of which was the right hand of Proto-Martyr Stephen, who is the family patron saint (“Slava”) of Bishop Akakije.
His Grace Bishop Akakije long has had the desire to visit the museum of the anti-Bolshevik battle in the town of Podolsk founded by Vladimir Melihov, a well-known Cossack activist. The museum is located on his private property in a spacious building next to which stands a picturesque log church dedicated to Tsar-Martyr Nicholai, in front of which rises an imposing statue of the Tsar.
The subject of the museum’s displays along with its very rare and precious artifacts are connected to the period before, during, and after the bloody October Revolution, the period of the Russian Civil War, and the growth of the monstrous, godless creation of the Soviet Union, along with the period of the Second World War.  The displays faithfully and graphically reveal to every visitor another side of history from that of the mainstream.  With a detailed tour by an expert guide, in our case Mr. Melihov himself, a visitor comes face to face with the true essence of the tragedy of the overthrow of the Autocrat by democracy, socialism, liberalism and communism under the pretense of a wish for “freedom” which was pushed by an international group of Masons and Jews.  The exhibition, along with openly exposing the supreme evil and bestial nature of the Revolution and its heritage also displays the faithful sons of Russia who fearlessly stood up to the red beasts. Through the exhibition one can follow the continuity of the fight against the Bolsheviks, from the heroic first fighters of the White Army, dauntless monarchists and anti-Communists, to the White emigration and the fight against the Communists in the Second World War, then finally, the tragedy of the violent repatriation, mass executions and deportation to Stalin’s death camps.  A special accent was put on the massive participation of the Cossacks in the anti-Bolshevik fight. 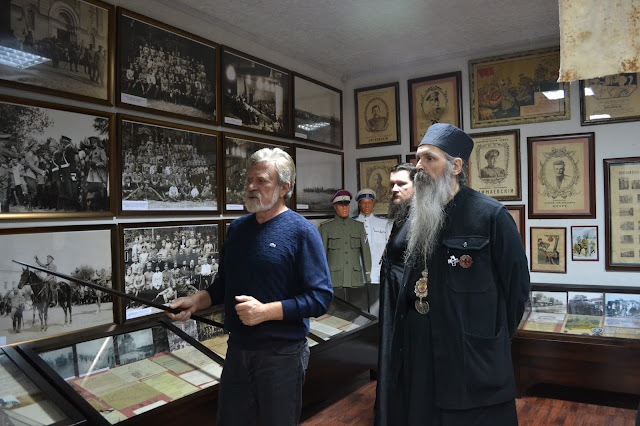 The museum and its founder Mr. Melihov have suffered a long persecution and unpleasantness from the Russian Federation authorities, which constantly try to close the museum. Mr. Melihov has been arrested several times while at the same time for years he has been in tiresome court cases defending himself from accusations of propagating so-called extremism. After a tour of the museum Mr. Melihov hosted Bishop Akakije to lunch in his home.
In contrast to the stunning beauty and sanctities of Russia, a very tortuous and unpleasant impression was made on the travelers by the horrifying fact that on every square of any larger or smaller city and village there had to be a well-polished monument or at least a bust of V.I. Lenin.  His face, the pentagram and the hammer and sickle can also be seen everywhere, while the vaulted Moscow subway abounds with these images. The display of Lenin everywhere, naming squares, boulevards, streets, schools, libraries, scientific and cultural institutions after him, and to top it off, his disgusting embalmed corpse in the very heart of Holy Russia betray the lie of the claim that Russia has been freed of the demonic evil of Communism.  This gruesome, dark side of Russia, which many lightly ignore, cannot leave a single honorable man indifferent.  As much as modern post-Soviet, or better said neo-Soviet Russia delights with its antiquities and sanctities, so much does its still-living Communism disappoint to the extreme.  Russia, the land of bright heavenly light and the deepest, hellish darkness… a land of stunning opposites and contrasts.