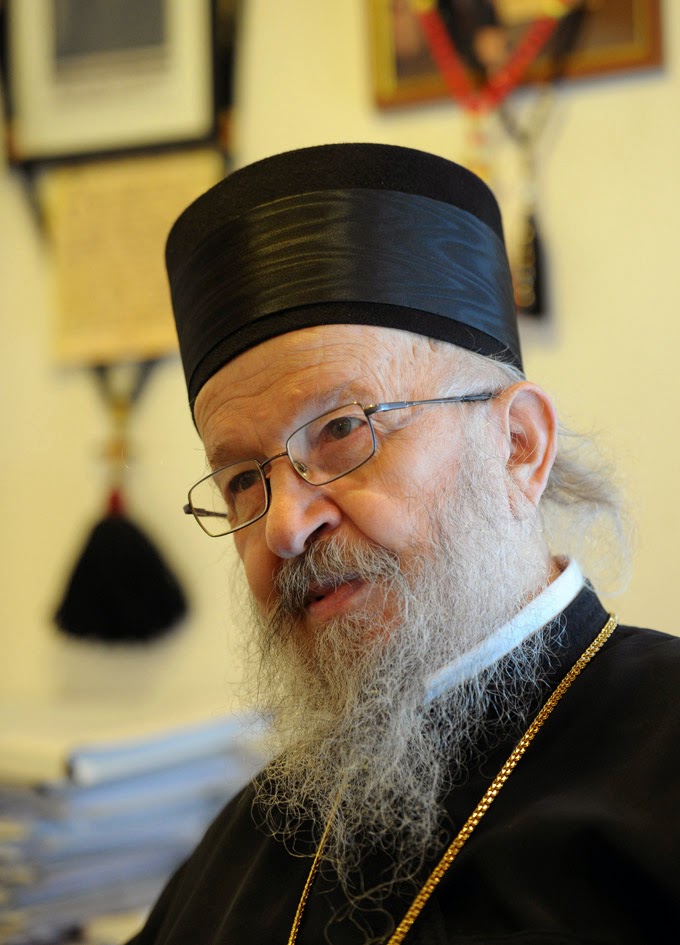 For a long time I had the wish and intention to converse with Bishop Artemije as I was interested in his position on True Orthodoxy  and a possible union with the  STOC.  Although  Bishop Artemije is an anti-ecumenist and opposes innovations, there are quite a few unclear things and contradictions in his confession of faith.  To wit, I heard from his believers that they have the same confession of faith as the STOC, while in their actions it can be seen that this is not exactly true.  Bishop Artemije concelebrated with New Calendar schismatics several times and received both help and support from them, meanwhile declaring the Old Calendarists schismatics.  He also allows his faithful to go to services and receive communion in the Serbian Patriarchate even if he considers some if its hierarchy heretics.


Such a modus operandi on the part of Bishop Artemije and the Rashko-Prizren Eparchy in Exile was quite obscure and confusing to me, and thus I wanted to speak with Bishop Artemije in person and see what the matter was all about.  During a conversation with His Grace Bishop Akakije and my brother presbyters, I received a blessing to meet with Bp. Artemije.  The meeting was arranged through Hieromonk Damian.  We agreed to meet and converse during Great Lent 2014 on the Tuesday of the week dedicated to St. John of the Ladder.  That afternoon I arrived at the bishop’s home on Bistrich street in Belgrade where he received me.  Humbly I said to him that we greatly respect their fight and zeal for the Orthodox faith and the traditions of the fathers, and that in good time we should speak about the possibility of union, so that in communion in Truth we could trod the warpath against the pan-heresy of ecumenism and all of the other false teachings which are eating away at our Serbian Church.  This proposition he categorically rejected and decidedly told me that such a thing would be impossible.  His response truly surprised me, as I had expected – considering his declarations about official Orthodoxy – that in the near future such a discourse would be inevitable.  It was for just such a dialogue that I had come to see him, to begin treating this question - taking into account the fact that the Rashko-Prizren Eparchy in Exile was of greater numbers than we, with more parishes, while we on the other hand have been in True Orthodoxy longer and have our apostolic succession from the Russian Church Abroad – together, for the sake of our much-suffering people, we could return True Orthodoxy to Serbia with our united strengths, as has been the case in Russia, Greece, Bulgaria, Romania, and the entire  world.

Then I began to list all the facts about the differences in confession of faith between us and official Orthodoxy, which he could not refute.  He said of the New Calendar that it is erroneous, but remained firm in his stance that the Old Calendarists are a schism, which surprised me.  I even brought up the fact in support of which exist many written proofs in Greece, that Bishop Nicholai (Velimirovich) helped the Greek Old Calendarists with holy myro, and even offered Metropolitan Chrysostom I of blessed memory (the head of the Old Calendar Church) help in the consecrating of new bishops, all of which Bp. Artemije did not know, and said that he did not believe.  I asked him of what he thought of the future for his flock, as he was getting on in years, and he replied that I need not worry about such a thing.  On the basis of the entire conversation I formed the strong impression that he was waiting for some kind of agreement with the official church about his return to his eparchy and that confession of the faith was not the principal matter.  Many had warned me of just this, as after all he had not left the SP because of confession of the faith, but rather had been driven out of his eparchy in a lawless manner.  I asked myself what could be expected at all of such people all of whom take part in the great apostasy both canonical and moral, who had placed their signature on the warrant for his removal.   Later I found out from trustworthy sources that he met with them for the purpose of a possible agreement, e.g. a withdrawal of their mutual accusations and his return to his eparchy.  The strangest thing of all to me was that I perceived during my conversations with his flock (laymen) that they for the most part have the same confession of faith as the Serbian True Orthodox Church, while it is a different case for Bishop Artemije himself.  We ended our conversation pleasantly, (although I was disappointed), exchanged gifts and parted in peace.  I still have hope, and pray, that Bishop Artemije and his pious flock will come to see the peril and trap of official Orthodoxy and fully take their stand on the side of True Orthodoxy.

The Eve of the Sunday of Orthodoxy 2015
Belgrade

With filial loyalty to the Holy Hierarchal Council


Priest Urosh Manchich, last among all