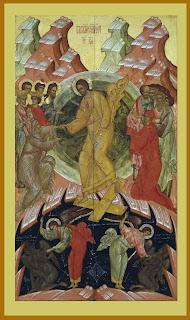 Let God arise and let His enemies be scattered!

To All the Faithful Children of St. Sava’s Serbian Church, I direct this most radiant and joyous ancient Christian Paschal greeting: Christ is Risen!

Christ is risen from the tomb, as He foretold, giving us eternal life and great mercy.  Truly, we have been deemed worthy of a great mercy with the Resurrection of Christ.  We were given forgiveness of sins, freedom from enslavement to the devil, and the power to uproot our vices and weaknesses.  We were given immortality.


We can already feel this great mercy now, for our bodies and souls are inexpressibly strengthened by the Divine Mysteries.  The Lord fulfils our prayers which we offer to Him with faith.  He grants us consolation in all of our sorrows.  He gives us every good thing already in this life, for He is the vanquisher of death – the final and eternal Vanquisher.
With all of our souls, we celebrate the all-joyous Resurrection of Christ this year as well, but we cannot give ourselves to complete joy when great misfortunes are presssing upon us:  this year’s joy of the Resurrection is more of a cry of hope.  With the Psalmist David we also should weep for the Serbian Jerusalem:
“How can we sing the Lord’s song in a strange land?
If I forget thee, O Kosovo, let my right hand be forgotten.
Let my tongue cleave to my throat if I remember thee not,
If I prize thee not, Kosovo, as the head of all my joys.”

We all know that our Christ-named nation today is besieged by a great misfortune.  Yet, in this darkness of great misfortune we sense that we have not been deprived of the Lord’s holy help, for hope in the help of Highest has not abandoned us:  the Lord Vanquisher truly promised that He is with us for all days until the end of this age.  We also know that the Lord allows great misfortunes because of many human sins.  Let us just observe this, not looking far into the past:  here, Passion Week of the holy, saving sufferings of Christ which preceded this radiant feast of the Lord’s Resurrection.  In the middle of this week, conscious-less and de-divinized Serbs, many of them, celebrated with drink and unfasting food some kind of Comminist-pagan holiday, “the First of May”?!  On Great Wednesday, the day when Judas betrayed Christ, during the time when fasting should reach its peak and every Serb should piously keep vigil at the dreadful liturgical events of the holy, saving sufferings of Christ?!  This is terrible.  It could not be worse.  This is truly a repetition of Judas’ betrayal.  We Orthodox Christians, St. Sava’s Serbs, in their own fatherland are truly as if in a strange land.  How then can we sing the Lord’s songs with full, untroubled joy?  The great misfortune which we are speaking of here can be summarized in a few sentences which our glorious Patriarch-Martyr Barnabas spoke not long ago, in 1937, in his New Year’s epistle during the time of the Concordat crisis:
“One of our misfortunes is the degeneration of reason, the other the degeneration of of morals.  Intellectual and moral degeration – these are dark, hail-bearing clouds which we are bringing from the old into this new year.  You will understand me better when I tell you:  our authorities have lost their minds and their honor.  The fact that they have lost their mind is shown by their inconsistency and their contradiction in the way they take care of this most precious state and how they lead our martyric people.  Our biblical people have the proverb:  "When God wants to punish someone, first He takes away their mind."

Serbia's current rulers, in the full view of all of us, without drop of shame in front of the people or fear of God and Saint Sava, are giving over a part of the centuries-old holy Serbian land:  Kosovo and Metohija.  It is a fact that great force has pressed upon us and occupied our land as the Ottomans once did. In such a situation Serbia can only allow itself to involuntarily accept a temporary occupation of a part of our country until conditions  are made for the freeing of the occupied territory.  Thus should the matter be presented to our people, along with the Western powers, which are pressing us to voluntarily, with our consent give over something which does not belong to us, that is, to our generation.  Kosovo and Metohija are Serbian, they belong to all Serbs, to the reposed as well as those yet to be born. That is why no one of the Serbs has a right, under any circumstances, to formalize the alienation of even one inch of Serbian land, which is soaked with the blood of a multitude of holy martyrs.  No one has the right to do this - not politicians, nor the people with some kind of referendum - no one!  If anyone dares to do such a thing, Lazarus' curse will come upon him.  Yes, that terrible curse will come upon everyone who turns his back on the Kosovo testament, which is inextricably woven into the ethos of the Serbian people.
Unfortunately, the official church, which was the only one who could have changed everything, did not react adequately.  The recent public Invocation and Address to the head of state of Serbia by the Belgrade Patriarchate, even if it was strong and concrete, because it was not sufficiently ultimate, more resembled Pilate's washing of hands.
In such situations the church and the hierarchs of the fatherland must react as they did in 1937 when the Holy Hierarchical Council of the Serbian Orthodox Church resolved to excommunicate all the ministers and members of the Orthodox faith who voted for the Concordat.  With this excommunication went the clarification that not a single clergyman, for any reason, for any clerical service or private business could enter the house of the ministers and members in question.  It was ordered as well that this decision be read to the faithful after the next liturgy in all the churches.  Within the clarification it was also recommended that not only the clergy should avoid contact with the individuals under punishment, but that the faithful should take up the same stance towards them.  Only such drastic measures could bear fruit then and now. The Concordat was withdrawn, and the Hierarchical Council of the SPC ended the excommunication from the church of the punished ministers and representatives.
As it is well known, we Serbian True Orthodox Christians do not recognize the Belgrade hierarchs as the canonical and Orthodox episcopacy of our fatherland’s Serbian Church, due among other things to the lack of repentance for the past cooperation with the godless Communist powers, and especially for the active participation, in word and deed, in the pan-heresy of ecumenism and organic membership in the World Council of Churches.  Despite this, we hoped that the Serbian Patriarchate, using its great reputation and influence on the Serbian people, would finally react sharply, if not in the question of the defence of the faith, at least in the question of this unfortunate state treason.  Our hopes, however, were dashed.  With its stance of Pilate-like washing of the hands, the Serbian Patriarchate remained Sergianistically servile to the state powers, once Communist, now democratic, even in these fateful moments when the most vital interests the Serbian Church and State are being threatened, when the centuries-old territories of Kosovo and Metohija should be defended.
Aware of what misfortune our people is in, and at the same time aware of our unenviable, illegal, ie catacomb position in relation to the state, like a voice crying from the wilderness, I call all Serbian brothers, honourable sons of St. Sava and patriots, in the fatherland and abroad, to do all that is within their power for all patriotic powers to be poured into one front to stand firmly beneath the uniting battle flag for the preservation and defense of all that these deformed, godless, communist, post-communist, and democratic times have trampled upon and destroyed.
The conscious and pious part of our Serbian people must at last unite and pronounce a great and  sharp “NO!” to all the enemies of God and national relics.  Every Serb who gives any kind of support to any kind of authory, political party or coalition which accepts the giving up of Kosovo and Metohija must know that he will fall under the terrible curse of Lazar:
“Whoever is Serbian and of Serbian birth,
Of Serbian blood and generation,
And comes not to the battle of Kosovo,
May he never have the progeny that his heart desires,
Neither son nor daughter!
May nothing grow that his hand sows,
Neither dark wine nor white wheat!
May rust drop from him for every generation!”
As bright rays of sun after a dark night dispel the darkness, so the Resurrected Christ shatters not only the darkness of our souls, but the darkness of the heavy clouds which have descended upon our much-suffering Christ-named people.
With the aspiration that as in the time of the honourable  Prince Lazar, we all unite around the Kosovo testament of the defence of the faith and fatherland, we hope and firmly believe that the time will come when the enemies of the Church and our people will be defeated:
Let God arise and let His enemies be scattered!
From the free Serbian mountains, 2013 A.D.
Your daily intercessor in the Risen Lord,
+ Bishop Akakije